Elementary Choir
In this section 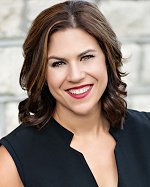 Janie Brokenicky is a full-time instructor at Kansas State University, teaching applied voice and music theory, while concurrently pursuing a PhD in Curriculum and Instruction with a focus in music theory. She is also executive director and co-founder of the Flint Hills Children's Choirs, based out of Manhattan, KS. Her choirs have performed at the KMEA State Convention, collaborated with the Kansas City ballet and performed with the Wichita Symphony Orchestra and soloist Chris Mann. In June 2019 they performed in Stern Auditorium at Carnegie Hall, New York City and will travel to Chicago in 2020 and Scotland in 2021. Professionally, Janie has served as a guest clinician and adjudicator in Kansas, Nebraska, and Missouri. She served 8 years on the board for the Kansas Choral Directors Association as both chair of women’s choirs and North Central representative. She received the 2010 KCDA Young Director of the Year and 2009 Kansas Horizon Award for outstanding achievement as a first-year teacher.

As a performer, Janie has been a featured soloist at The Kauffman Center (Kansas City), the Meyerson Symphony Hall (Dallas), and The Folly Theater (Kansas City). Additionally, she has been a guest artist for the Wichita Chamber Chorale, Hays Symphony Orchestra, Flint Hills Masterworks Chorale, served three summers as artist-in-residence for the Ad Astra Summer Music Festival, and this year will collaborate with the Salina Symphony. Janie has enjoyed several collaborations with the K-State symphony since joining the vocal faculty, and in 2017 took on the infamous role of The Queen of the Night in the KSU production of Mozart's The Magic Flute. This past year she performed with the Wichita Grand Opera as a guest soloist for both their Opera on the Lake production and Chris Mann: Home for Christmas, Part 2.

Janie holds degrees in music education, choral conducting and vocal performance, a degree in mathematics (hence her love for music theory) and is an accomplished oboist.